I have no idea where I got this recipe from.  All I know is that it has to be one of my favorite meals of this winter.
Our most recent produce delivery included an acorn squash.  John isn’t the biggest fan of dishes that feature winter squash, so I knew it had to be a supporting character.  I sliced it up to roast it while I figured out what to make with it.

After brushing each slice with olive oil, I threw a bulb of garlic in to roast, too, for good measure.  You never know when you are going to need it!

For the main dish, I decided to go with the old standby of beef cubes.  To start, I melted down leftover bacon grease on our cast iron pan.

I added 2 BIG sliced up onions and cooked them down to nothingness.

While they were cooking, I started up some risotto as a side.  The strong autumn flavors called for a red-wine risotto.  That, and the fact that we had an open bottle of red wine that needed to be used up.  To start the risotto, I sauteed some onions in butter.

Then, I added 1 cup of arborio rice and let that get a little buttery.

Next, I added in 1/2 cup of red wine and stirred it until it was fully absorbed.

Then, about 1/2 cup at a time, I added in leftover whey and chicken broth.  Each time, I would alternate whey and broth.

When it was almost done, I turned my attention to the steak cubes.  By this time, the onions were nice and brown, so I removed them from the pan and added butter instead.

Into the pan went the beef cubes!

When they were getting brown and tasty…

I sliced up the roasted acorn squash into cube-sized pieces.

I added them to the pan, along with the onions, and let the flavors melt together.

As the steak mix danced together, I added in some butter and Parmesan cheese to the risotto.

The meal was complete!  It was the perfect combination of flavors, and we enjoyed it more than almost anything we have made lately.

This post was shared on Fat Tuesday, Dinner on a Dime, and the Hearth and Soul Hop!

Continuing with our soup trend, the next thing I made was Butternut Squash soup.  It was made easy because I chopped up the onions, carrots, and celery when I made yesterday’s soup.
I sauteed onions, carrots, celery, and sweet potatoes in bacon grease.

I added in a jar of butternut squash, and a ton of chicken broth and brought it to a simmer.  Just before it was time to serve it, I added in some raw milk, cinnamon, and sea salt.

The verdict? Not too pretty to look at, decent taste.  Nothing I would make again, but it served a purpose.

Well, it’s not mashed WITH the meat.  It is mashed, with meat on the side.
With all the leftover squash from the risotto, I had to do something with it.  It had to be big, since there was a TON of squash.  Mashing them seemed like the best bet.

Allll that squash got simmered with lots of butter and onions. 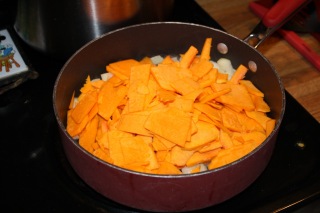 Chicken stock was added as necessary to get it really really soft.

Eventually it just mashed itself down as I stirred it.  I added in cinnamon and caraway seeds along with the sea salt to give it some awesome flavor.  John loves that combo, because it is the main seasoning in his FAVORITE Lebanese dessert, meghli.
I made a quick crockpot dish with some grassfed beef I had frozen a while ago.  I layered some sliced onion in the bottom of the crockpot.

Then the defrosted meat was added.

…and the sauce was poured on top.  It was made of olive oil, soy sauce, apple cider vinegar, salt, and pepper. I couldn’t tell you the exact proportions because I didn’t measure them.

When it was all in there, I added a bunch of garlic cloves on top for good luck and cooked it on low all day long. 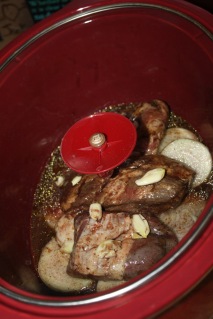 The finished product was delicious and autumnal!

Fall is hands-down my favorite season.  The beautiful colors on the trees, the gorgeous blue of the sky, the air that you just want to take a bite out of… The list goes on and on!
The awesome fall produce is definitely a perk to the season (as is being able to see the lake from my front window!).  Last fall John and I went Apple Picking and had SO MUCH FUN.  This fall’s first produce meal is Butternut Squash, Risotto Style… MMMmmMMMmm…..
I saw the recipe in a cookbook from the library and knew right then and there I had to have it.  The only little itty bitty problem?  Apparently I didn’t have the ingredients I thought I had.
The recipe called for 1.5 cups of Arborio Rice.  I had barely a cup.  The recipe called for a rind of Parmesan cheese.  Apparently I had a rind of another (cheddar?  goat?).  The recipe called for 2.5 cups of butternut squash, peeled and sliced.  I had a bit more. 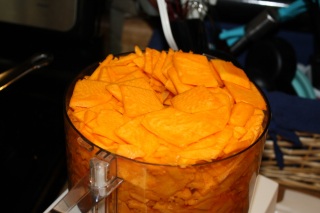 Yeah.  I had a lot more.
So the recipe.  The original recipe is in “Cooking School Secrets for Real World Cooks” by Linda Carucci and looks amazing.  My version?  It was okay.  Not bad for what I had.

Not pictured?  The rice flour used to make up for the fact that I was missing enough rice.
An onion was chopped finely and added to a buttery pan.

While they softened, I chopped WAY TOO MUCH butternut squash in the food processor.

2 cups of said squash were added to the softened onions, along with some sage and sea salt.

For perspective, let me show you what the food processor looked like with the 2 cups of squash removed.

Right.  Too much squash.
So the seasoned onion and squash warmed up and the squash started to get sticky.  At that point, I added some chicken stock to the pan and brought it to a boil. 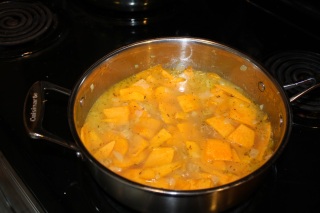 When the squash started to break down and get all mushy, I added the rice and what I THOUGHT were Parmesan rinds.  John informed me later that night that they were not.  I don’t know WHAT kind of cheese they were.

As it cooked, I kept adding chicken stock.  Unfortunately, when it was done, it needed to be thicker.  I thought quickly and remembered we had some rice flour in the pantry.  Just the thing! 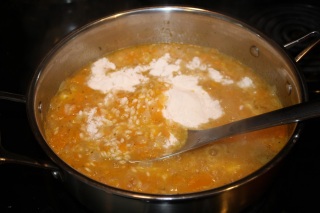 It was stirred in and thickened it right up.  Whew!
Eventually it was alllll done.

Once some Balsamic Vinegar was drizzled on top, it was good to go!

The verdict?  Even with the… issues, it was yummy!