Yesterday was a beautiful day here in NJ.  I took full advantage of it, spending my morning outside tidying up.  My camera just so happened to come outside with me, and I snapped a few shots so I could share our garden with you!
The herb pots.

and the lettuce bowl.  This has some pathetic seedlings we grew, arugula, and butter lettuce.

All of the potted plants (aside from the puny seedlings) were purchased while we were on vacation.  Near the seedlings is our garlic plot.  John grew this from other garlics.

I managed a mini-harvest today while I was poking around.

By type?  Basils, oregano, and parsley…

The lettuce became my lunch, along with a tomato, some blueberries, and John’s hummus.

Before I go, here are a few other shots from the garden… Enjoy!

This post was featured on Pennywise Platter Thursday at The Nourishing Gourmet!

So.  The first week of spring has brought me…
Yummy breakfasts (home made granola, raw milk, and strawberries)

ANOTHER snow storm… or 2…

This post was featured on “Let’s Do Brunch” at the life and times of the 21st century housewife!

You may have noticed that here at Crest Cottage, we are… frugal.  You can dress it up and call it “Green,” but at the end of the day, we like to squeeeeeeeze every last cent and then use the things said cent were spent on as much as possible.
Now that we have our own home, with a bit of land, we are planning on doing some gardening.  Right now, we only have some garlic planted (and that was all John.  I am more of a planner and would take a year just to learn all about it.  He took a whole bunch of garlic cloves, stuck them in the ground, and they grew.  He’s awesome like that.) but in the future we would like much more.  We do NOT, however, want to spend much additional money on this gardening thing.  The point it to save money by growing (and then preserving) healthy food, not spend extra to make it happen.  Enter:  Compost.
We don’t waste much food, using them for other recipes and stock, but some things just aren’t used.  Since we wanted to have healthy soil and get the most out of our food $$, we started to compost.
It started easily.  Our backyard is a forest, so once the seasons changed, our patio areas were covered in leaves.  Instead of buying bags and putting them out for the town to take (they make it into compost and mulch), we stuck them in a pile in the forest, near where we were planning on having our garden.

Now, we save all produce scraps not destined for other recipes and throw them in there. 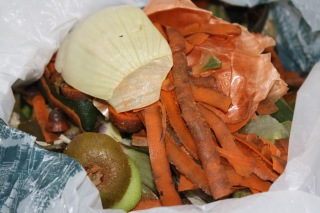 There should be a balance between  “green” things (produce scraps) and “brown” things (leaves).  Since we have tons and tons and TONS of leaves, we have recruited both of our sets of parents to help out.  We also add in coffee grounds and egg shells occasionally.
Personally, we keep a big tupperware in the fridge and just add in the scraps.  When it is full, I throw it into the pile.

John regularly goes out and scoops it around to incorporate everything.  If it has been unusually dry, he also occasionally waters it.
That’s all we have done so far!  It is starting to decompose on the bottom already, so we must be doing something right.  I will keep you posted as the year goes on, but I have faith that this will work, and be a huge asset to our gardening!

This post has been featured on Simple Lives Thursday at Gnowfglins and The Pennywise Platter at the Nourishing Gourmet!