I am really into making the soaked whole wheat macaroni lately.  It does take a little time (more than opening a box, that’s for sure!) but it isn’t hard.  I have to get better at the texture, though.  Sometimes it is too doughy, sometimes it is too soft.  I am having trouble getting it al dente, which is how we like it.  The texture was the biggest stumbling block with this ravioli.  I am open to suggestions!!!
Anyway, the flavor of everything else was great.  I wanted to make the filling with clams, but we didn’t have any.  So, I sauteed some shrimp in butter and olive oil.

When they were done, I toasted up some bread and crumbled it in the pan with more butter, a can of anchovies, and some garlic.

I put the shrimp and the breadcrumb mix in the food processor with an egg and some parsley.

Once this was done, I rolled out the dough.

Then, I spooned the mixture on.

I covered the raviolis, pressed the air out, and sealed them.

To go with it, I sauteed some spinach in lemon and LOTS of butter.

We enjoyed the Macaroni Monday meal with an arugula tomato salad with balsamic vinaigrette and shaved Parmesan cheese!

The whole thing wouldn’t have taken too long, but, as always, I get easily distracted!

This post was shared on Fat Tuesday, Traditional Tuesday, and Scratch Cookin’ Tuesday!

I didn’t put the names of the veggies used in this dish into the title on purpose.  It is a yummy meal or side dish and could be made with a variety of vegetables and I didn’t want anyone to write it off because I chose to make it with turnips.  For many people (including my father… sorry Dad!), turnips constitute an automatic no-go.  I beg you to try the recipe anyway, changing the veggies if need be.  If you can, though, try the turnips.  You can’t even really tell they are turnips!
On to the recipe…
First, I chopped up carrots and turnips and simmered them in a little chicken broth to make them nice and soft.

I took them out of the pan and set them aside while I did the next step.  I sauteed onion and celery in butter until tender.

I set THAT aside and sauteed shrimp in butter.

When they were ready, I added in the celery and onion mix along with a little flour, salt, and pepper.

When it was mixed together, I added in about a cup and a half of milk and the broth the root veggies cooked in to the pan.

I cooked it down until it was nice and thick.

When it was thick enough to coat the spoon, I shredded in lots and lots of cheddar cheese.

Topped with a little fresh parsley, this was so tasty and filling.  I would DEFINITELY make it again.

2.  Cook shrimp in butter and garlic

3.  Add more butter and garlic (roasted if you have any lying around)

6.  Put shrimp back in and season as desired (I just used some sea salt and butter)

7.  Serve over macaroni (or rice… or quinoa… or anything, really) and enjoy!

This post was shared with the Hearth and Soul Hop!

I was going to make shrimp quesadillas with black beans and rice on the side.  I have been really tired lately, though, so I didn’t have the energy to make the tortillas.  Our milk/meat/cheese delivery service wasn’t going to be delivering for a little while, so I had to make do with the cheese we have until then.  AND THEN John tells me that, well, he doesn’t really like the dried beans cooked.  He likes the canned ones better.  I had cooked up a boat-load of back beans and frozen them and was planning on using them.  I was at a total loss.  No idea what to make.
I grabbed the black beans out of the freezer to defrost and set up the rice cooker with 2.5 cups of brown rice/5 cups turkey stock.  As I was setting it up, I realized that it has a steamer basket.  Hmmm… Maybe steaming the beans to defrost them would make them softer, the way John likes them?  I tried it.
While that all cooked, I chopped up 1/2 an onion and 3 big cloves of garlic and put them in the pan with a chunk of butter.

When they were soft and smelled like heaven, I added some cumin, parsley, and salt.

Then, the spinach jumped into the pan.  I’m not sure how it got there, but it did. 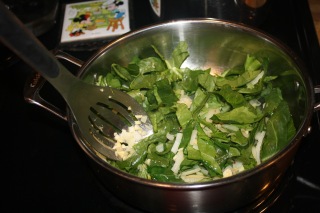 When it wilted into the delicious flavors, with some help from extra butter, the now-defrosted and somewhat mushy (YES!) beans were added, along with defrosted raw shrimp.

At this point, I poured in a little bit of turkey stock to help it all along.  When the shrimp looked nice and pink, I added the rice and some more cumin.

For all my exhaustion and doubts, it turned out to be way better than I could have imagined.  It was warm and filling and yummy!
With a salad on the side! 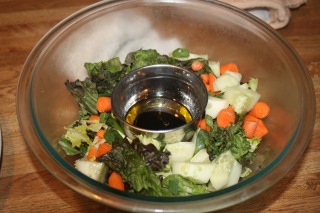 This post was also featured at Real Food Wednesday with Kelly the Kitchen Kop!